Today’s wide availability of vegan meat substitutes in the grocer’s freezer helps break the ice for people that want to experiment with plant-based foods. The taste, convenience and quality of these products has improved greatly over the past decade, but like many convenience foods, some packaged faux meat products can be high in sodium or fillers. While packaged, meat-alternative products are ideal for a tasty occasional treat, there’s a whole world of options beyond the freezer aisle for those that want to expand their vegan palates.

Arielle and Brandon Hawthorne, co-owners of Twisted Plants, a popular, plant-based restaurant in the Milwaukee area, make their vegan food approachable by creating plant-based foods that mimic everyday, non-plant-based options. “I think that motivates people to try it because they feel they can still have the same flavor and taste they’re used to, but in a healthier version,” Arielle says. They use items like jackfruit, a species of tree in the fig family, which takes on the taste and consistency of pulled pork when shredded and marinated in sauces or spices.

Going plant-based does not mean going without. Del Sroufe, a vegan chef based in Columbus, Ohio, culinary specialist at the T. Colin Campbell Center for Nutritional Studies and author of the Forks Over Knives companion cookbook, recommends that people craft satisfying, plant-based entrées at home by starting with recipes they like, and then looking for plant-based versions of those. “If you like pizza, you can still have pizza. If you like Italian cuisine, there are plenty of Italian recipes,” he says.

Priyanka Naik, a self-taught Indian vegan chef, Food Network champion and author of the new vegan cookbook The Modern Tiffin, advises to gradually start a plant-based diet with one meat-free day per week and then increase. She adds that when eating out, opt for vegetarian or vegan options to be sure a plant-based lifestyle is sustainable outside of the home kitchen.

Substitutes at Home
The concept of protein at the center of every dinner plate has been ingrained in American culture. Dismantling that perspective opens up a whole new world and encourages thinking about vegetarian and vegan food in a new light, Naik says.

Sroufe adds that we often believe we won’t get enough protein from plant-based foods. “There’s been a lot of science to refute that. The World Health Organization has identified people that exist healthfully on less than 6 percent protein in their diets.”

Fruits, vegetables and grains are often more economical than packaged convenience foods, especially when purchased from local farmers markets. Pasta, rice and beans, which can be purchased in bulk, are budget-friendly. Naik cooks with the objective of putting vegetables at the forefront, using her Indian ancestry and global influences to make veggies the star of the show.

Cauliflower and eggplant can be prepared in “steak” form as a main course or stand in as healthier versions of pub-food appetizers like buffalo chicken wings. For those craving meatier flavors, chickpea flour becomes crumbly when water is added, effecting a good substitute for ground beef. Adding chipotle, cumin and other seasonings emulates taco meat. “Chickpea flour is high in protein and is used in a lot of Indian cuisine,” Naik says. “You can buy the flour or grind dry chickpeas to make the flour.”

Jackfruit adapts easily to myriad recipe styles. Sroufe notes it can be used in dumplings and tacos. Hawthorne also uses it to make vegan ribs and in beef-style stews.

Don’t toss that banana peel—Naik says using clean, organic banana peels after the flesh has been removed is a zero-waste approach to plant-based eating. Cooks can shred the peel with a fork and sauté it with soy sauce and other spices to mimic pulled meat.

Tofu gets a bad rap, Sroufe says, noting that many people worldwide eat soy products without experiencing digestive issues. He often uses tofu for a number of presentations. “Silken tofu can be used to make pudding. Crumbled tofu can be substituted for ricotta in lasagna, or you can marinate tofu to make bacon for sandwiches. It’s a good, filling food.”

Sroufe also uses millet as a base for meatloaf, meatballs and sloppy joes. Several mushroom varieties have meaty textures, and when battered and fried, they emulate fried chicken. Hawthorne also uses mushrooms as a meat replacement in Philly cheese steak sandwiches. Seitan, made with a vital wheat gluten base, can be used for meatballs.

By experimenting with an array of vegetables, grains, nuts and seeds to create balanced textures and flavors, even the choosiest omnivores won’t miss the meat.

Sheila Julson is a Milwaukee-based freelance writer and contributor to Natural Awakenings magazines throughout the country. 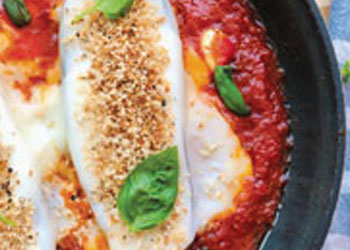 photo courtesy of Priyanka NaikInspired by the Italian restaurants of her Staten Island neighborhood while growing up, Naik has created a vegan version of this Italian favorite.

Pour about 1 Tbsp neutral oil into a medium or large nonstick skillet. Heat over medium-high flame. Meanwhile, score the meat of the eggplant in crosshatches. Do not to cut all the way through the skin.

Place eggplant slices meat side down into the hot skillet and cover with a lid. After 3 to 4 minutes, check the eggplant to be sure it’s turning golden brown; if it looks charred, lower the heat. Cover with lid and continue cooking for another 5 minutes. Flip eggplant slices (meat side should be tender and able to pierce with a fork).

Sprinkle with a bit of kosher salt, cover with the lid and cook another 4 to 5 minutes. Eggplant should be very soft, fork tender and cooked, but not falling apart. Remove from pan.

Lower heat slightly and pour in olive oil and Calabrian chili oil. Once hot, add garlic, sautéing until slightly golden. Add the sprig of oregano.
Once super-fragrant, pour in the jar of sauce and a sprig of basil and water. Lower the heat to medium-low. Add sugar, tomato paste, salt, black pepper and chili flakes. Mix until incorporated and smooth. Once the sauce starts bubbling, add eggplants meat side-up.

Cover the lid and simmer for 2 to 3 minutes. Put cheese slices on top of the eggplant and close with the lid. While the cheese is melting, toast breadcrumbs in a separate pan. Sprinkle in salt and freshly ground black pepper to taste. Toast until golden brown and crispy. Turn off heat.

Remove lid from eggplant and once cheese is fully melted, top with breadcrumbs and fresh basil, and remove from heat. Serve with Italian crusty bread. 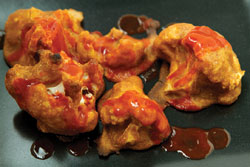 photo courtesy of Del SroufeThis healthier version of buffalo wings is meat-free and baked instead of fried, but full of flavor and spice. It can be eaten plain or, as Sroufe recommends, as a Buffalo Po’ Boy sandwich, served on a whole-grain hoagie or sandwich buns with cabbage and peanut slaw.

Place the coated florets on a nonstick baking sheet in a single layer. Bake for 25 minutes or until golden brown. Toss with extra red hot sauce if desired.

Read 1203 times
Tagged under
back to top