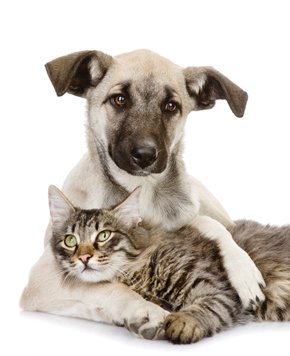 This inclusive term is used to describe any disorder of the liver. In both dogs and cats, common causes include toxins, infections, metabolic problems and tumors. In cats, infections and fatty liver disease are more likely, while dogs more often experience infections and tumors. Clinically affected pets are usually anorectic (not eating) and lethargic; in severe cases, jaundice may occur.

Conventional therapies depend to some extent on the cause, but in general, antibiotics and hospitalization for fluid therapy and forced feeding, often through a stomach tube, are necessary to give the pet the best chances of recovering. Pets with liver cancer are usually diagnosed too late to be a candidate for surgery, unless only one liver lobe is involved, or chemotherapy.

More gentle natural therapy often results in curing the condition, even in later stages, depending upon the root cause. The herb milk thistle is well known for its ability to heal liver damage. B vitamins, as well as the nutritional supplements comprising S-adenosylmethionine (SAMe) and phosphatidylcholine, may also be effective treatments.

Adrenal issues, especially common in middle-aged and older canines, can refer to Addison’s disease or Cushing’s disease—signifying decreased or increased adrenal function, respectively— and are commonly misdiagnosed as liver disease.

“In my veterinary practice, pets with elevated levels of enzymes indicating liver or adrenal disease are always treated with natural remedies first. In most cases, this treatment is effective and conventional medication is not needed.”
~ Dr. Shawn Messonnier

Addison’s disease, although not prevalent, is often incorrectly diagnosed because its symptoms of reduced appetite, vomiting, diarrhea and weakness are shared with most other diseases. Blood testing can be helpful, but is not always definitive.

Conventional treatment for either disease involves lifelong medication. Natural therapies that work to prevent and alleviate such ailments may involve adrenal glandular supplements, milk thistle and herbs such as licorice (for Addison’s disease) or ginseng and magnolia bark (for Cushing’s disease)

Regular laboratory testing is important for a pet to allow for early diagnosis and treatment of potentially life-threatening diseases. If a pet develops liver or adrenal disease, combining conventional therapies with natural remedies usually results in successful treatment of the condition.

Shawn Messonnier, a doctor of veterinary medicine practicing in Plano, TX, is the award-winning author of The Natural Health Bible for Dogs & Cats and Unexpected Miracles: Hope and Holistic Healing for Pets. Visit PetCareNaturally.com.

This article appears in the April 2013 issue of Natural Awakenings

Read 1357 times
Tagged under
back to top