Being Happy from the Inside Out 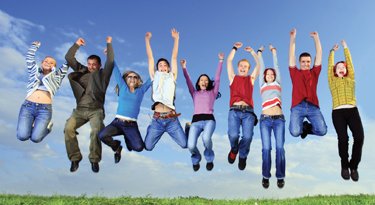 An age-old question rides a new wave of bestseller lists, university research and governmental soul-searching. The answers to “What are the secrets of a happy life?” might surprise us.

“Happiness is the only true measure of personal success,” advises Geoffrey James, of Hollis, New Hampshire, author of How to Say It: Business to Business Selling. His work confirms that the rollercoaster world of business does not always promote a sense of well-being. James believes, “The big enemy of happiness is worry, which comes from focusing on events that are outside your control.” For him, something as simple as a good night’s sleep contributes to personal happiness.

Each of us has certain things that help make us feel positive, and they often come in small moments, advises Ed Diener, Ph.D., a psychology professor at the University of Illinois and author of Happiness: Unlocking the Mysteries of Psychological Wealth. Based on 25 years of research into the subject, he’s a recognized expert in what he calls “subjective well-being.”

In a recent six-part BBC series on happiness, Diener told viewers, “It may sound silly, but we ask people, ‘How happy are you, on a scale of one to 10?’ The interesting thing is that it produces real answers that are valid—not perfect, but valid—and they predict all sorts of real things in their lives.”

The moment-to-moment path to happiness follows a trail blazed by paradox. A recent University of Missouri College of Business study by Marsha Richins, Ph.D., suggests that happiness is in the wanting, not the getting. As noted Positive Psychologist Martin Seligman, Ph.D., remarks, “Focusing solely on happiness as a foundation of a good life,” won’t get you there.

Gretchen Rubin, the New York City-based author of The Happiness Project and Happier at Home, further finds that, “Happiness doesn’t always make you feel happy.” Trying each day to be emotionally centered, affable, kind, conscientious, generous, patient, principled, accomplished, spiritual and true to yourself—the kind of person that should be happy and that makes other people happy—can be tough.

Widespread economic and associated financial challenges have made many question whether money can buy happiness, a common core assumption of the “happiness starts on the outside” approach. Apparently, money can sometimes buy feelings of well-being, but only to a certain degree, according to researchers Angus Deaton and Daniel Kahneman, at Princeton University’s Woodrow Wilson School of Public & International Affairs.

In 2010, they surveyed 450,000 randomly chosen residents across the country via daily questionnaires. The study revealed that, “Low income exacerbates the emotional pain associated with such misfortunes as divorce, ill health and being alone.” Yet they also discovered that, “High income buys life satisfaction, but not happiness,” and there is no further progress in happiness beyond an annual income of $75,000 (Proceedings of the National Academy of Sciences).

On the other side of the world, in the tiny Himalayan country of Bhutan, where 70 percent of its 717,000 citizens are subsistence farmers and an annual income of $75,000 would be considered a fortune, people say they are generally happy, partly due to the nation’s “happiness starts on the inside” philosophy. Since 1971, Bhutan has been operating based on a gross domestic happiness (GDH) value system. Bhutanese Prime Minister Jigmi Y. Thinley explains that the country has focused on growing both materially and spiritually, and citizen well-being has taken precedence over economic growth.

For decades, this was deemed an oddity by many in the West, although now it appears prescient. “It’s easy to mine the land and fish the seas and get rich,” says Thakur Singh Powdyel, Bhutan’s minister of education. “Yet we believe you cannot have a prosperous nation in the long run that does not conserve its natural environment or take care of the well-being of its people, which is being borne out by what is happening to the outside world.” The country measures its success in maintaining GDH by conducting regular surveys of the population. The reigning official definition of happiness involves peace, contentment and living in harmony with all creation.

Seligman, author of Flourish: A Visionary New Understanding of Happiness and Well-Being, has become a believer in GDH. “How can you measure well-being in a person, a family, a country or globally?” he queries. Research by Seligman and his colleagues at the University of Pennsylvania, in Philadelphia, points to four basic elements: positive emotion, relationships, meaning in life and accomplishment, or PERMA.

If I become happy and it makes you happy, it is like tipping the first domino so the next one falls and that happiness spreads.
~ James Fowler, economic behaviorist, University of California-San Diego

Seligman says there are proven ways to improve each element. For positive emotion, writing down three “blessings”, or things that went well that day, can increase our feelings of gratitude and well-being. For relationships, actively listening and being present for a loved one and having that attention returned can strengthen those bonds. Increasing meaning in our lives, says Seligman, can be a challenge for Westerners. “We have threadbare spiritual and relationship furniture. We have too much ‘I’ and not enough ‘we,’” he says. But getting involved in something that increases the “we” factor will help make us happier.

Self-surveys at AuthenticHappiness.com can help us identify our strengths and realize what we’re especially good at—and we increase our feelings of accomplishment by doing more of them. “You can even figure out how to do the task you like least by using your signature strength,” Seligman advises. He shares an example of a grocery store cashier that disliked bagging groceries, but was exceptional at social interaction. She made herself happier by chatting with her customers while she packed their selections.

Lara Blair, a portrait photographer in Camas, Washington, believes in celebrating strengths. “If making things is what you love, give it the space in your brain, home and life that it deserves.” Blair’s seminars and retreats help people tap ways to increase feelings of creativity, accomplishment and meaning. “If you nurture it and believe that growing this beautiful thing is worth the effort, the rewards will be more than you ever dreamed,” she says.

When, as a happily married lawyer with children, Rubin thought her life was missing something vital, she used her love for reading and writing to explore that wistful, “What if?” She started researching subjective happiness via Marcus Aurelius, Samuel Johnson, Benjamin Franklin and St. Thérèse de Lisieux, whom Rubin refers to as her “spiritual master.” She decided to testdrive her findings at Happiness-Project.com and began blogging about new ways of thinking and behaving that were bringing her and her readers greater selfrealization and contentment.

“A great place to start is with your own body,” she counsels. “Are you getting enough sleep? Are you getting good food to eat? When you take care of those very basic things, you feel energized, and then you can start moving to address other issues.”

Once we’ve upped our happiness quotient, it can still be difficult to stay at that level, says Kennon Sheldon, professor of psychological sciences at the University of Missouri, in Columbia. In a recent study conducted with researchers at the University of California-Riverside, Sheldon and his colleagues found that by both recognizing that the desire for “more” and “better” in our lives won’t stop and also appreciating what we have, we’ll stay happy. It’s equally vital to continually keep things fresh, with positive new experiences at home, work, play and exercise, as well as in relationships. In other words, sustained happiness takes a little work.

“Just before going to bed,” suggests James, “write down at least one wonderful thing that happened that day. It may be anything from making a child laugh to a big sale. Whatever it is, be grateful for the present day, because it will never come again.”

The benefits of individual wellbeing radiate to those around us, notes Seligman. “When individuals are flourishing, they are more productive at work, physically healthier and at peace.” He believes that as we find ways to increase positive emotion, relationships, meaning in life and individual accomplishment, it’s possible for life on Earth to flourish.

Judith Fertig is a regular contributor to Natural Awakenings.

This article appears in the June 2013 issue of Natural Awakenings

Read 10554 times
Tagged under
back to top