For most Americans, summer smells like fresh-cut grass and barbecue sizzling in the backyard. Approximately 64 percent of U.S. adults own a grill or smoker, but common practices are bad for the environment. Fortunately, many great chefs have the problem covered with delicious alternatives to traditional, carbon-emitting methods.

The Downside of Grilling
Most charcoal and all lighter fluids contain chemicals that create air pollution when burned, harming our health and the environment. Better alternatives are sustainably sourced, organic and natural materials, such as charcoal made from bamboo or coconut shells.

Entrepreneur Fred Grosse sought to solve another problem associated with conventional grilling materials: the taste of lighter fluid on barbecue foods. He invented Mojobricks, a carbon-neutral alternative to charcoal designed to impart a smoky flavor to grilled foods. “You’re breathing in 50 percent less particulate matter standing at the grill than if you grill with charcoal or wood,” he says about his bricks made with compressed sawdust from wood mills. “They heat food more efficiently, take up less storage space than bags of charcoal and keep trees growing in the forest.”

What Gets Grilled Matters
Americans eat three times more meat than the global average. To meet the immense demand, mass-produced beef is trucked across the nation with dire environmental impacts including cow methane emissions, the burning of fossil fuels for transport and excessive land use. To curtail these impacts, Americans can choose to reduce or eliminate their beef consumption and when they do decide to grill a ribeye or New York strip, choose local, organic, grass-fed beef.

Eliminating meat is simple as vegetarian and vegan options are innumerable. “Question what a burger is, and off you go with legumes, root vegetables, mushrooms, cheese or whatever you happen to feel like,” says Martin Nordin, author of Green Burgers. Genevieve Taylor’s new cookbook, Charred, features enticing meals to cook over a flame that include vegetables, spices, nuts, herbs and other inventive ingredients.

Amy Lawrence and Justin Fox Burks, co-authors of Low-Carb Vegetarian, have had a dramatic increase in requests for grilled versions of vegetarian dishes, a sign of increasing outdoor cooking trends.

Presentation for the Planet
When hosting backyard dinner parties, consider that paper and plastic dinnerware will end up in the landfill. Ask guests to bring a plate and fork or mix and match whatever dish sets are on hand. Another suggestion is to go vintage. “There has already been so much manufactured of everything, we wouldn’t need to manufacture another plate, for example, for another generation or two,” says Morgan Miller, owner of Rewind Decor vintage store in Madison, Wisconsin.

With a few adjustments, eco-grilling is easy, delicious and much better for the planet. Marinate locally sourced ingredients, burn as carbon-neutral a fire as possible and serve up delicious food on real plates that friends and family will help wash. Guests will be inspired and follow suit in their own homes. As Grosse says, “Each small difference adds up to big change.”

Laura Paisley Beck is a freelance writer and self-proclaimed foodie in Madison, Wisconsin. Reach out at This email address is being protected from spambots. You need JavaScript enabled to view it.. 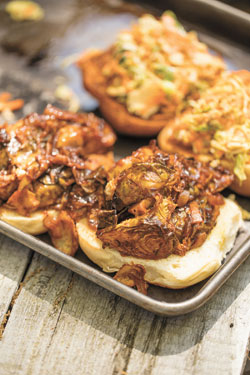 Put the BBQ Brussels aside until ready to assemble the sandwiches. On the bottom part of each hamburger bun, pile on the BBQ and top it with the slaw.

(measure all ingredients by volume) 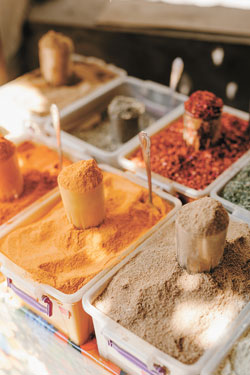 Mix all ingredients in a large food storage container until equally distributed.

*Dried porcini mushrooms can be found at almost any specialty grocery or ordered online. Turn the dried mushrooms into a powder by placing them in a coffee grinder or food processor and pulsing until no large bits remain.

Recipe by Justin Fox Burks and Amy Lawrence of The Chubby Vegetarian blog and cookbooks. 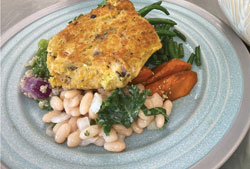 Combine all ingredients until well mixed to achieve a mashed potato consistency.

Portion the mixture into 4 oz portions using a portion scoop and press them down to form a patty.

Preheat a Sautee Pan with Olive oil and sear the crab cakes on both sides until golden brown.

Transfer them to small sheet tray and finish them in the oven at 350F for 8 to 10 minutes. 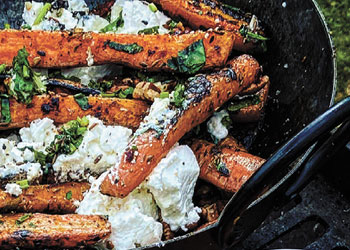 Trim the tops off the carrots and scrub under running water. Slice in half lengthwise, or into quarters if they are a little larger, to approximately finger-thickness.

Fill a pan with boiling water and add a little salt, then set over high heat and bring back to the boil. Once boiling, add the carrots and blanch for 3 minutes. Drain well and tip into a mixing bowl. While they are still hot, add the olive oil, cumin, brown sugar, chili flakes and garlic, and stir well to mix. Cover and leave to marinate for a couple of hours at room temperature.

Once ready to cook, fire up the barbecue for direct grilling, or preheat a cast-iron griddle pan on the hob. Lay the carrots on the grill bars or griddle and cook for 15 to 20 minutes, turning regularly, until they are nicely caramelized. If barbecuing, add a few smoking wood chunks or chips to up the smokiness. Use a brush to baste the carrots with any excess marinade from the bowl while turning.

Once soft and caramelized, scatter the carrots over a serving plate and dot with heaped teaspoons of ricotta. Sprinkle over the spring onions, chopped pecans and coriander. Finally, add a generous drizzle of olive oil and finish with a good grind of pepper. Serve while still warm.

Read 562 times
Tagged under
back to top