GCinnamon and ginger are wonderful spices to use in pet holiday treats. Both of these warming spices improve digestion and soothe the stomach lining. Select Ceylon cinnamon, not cassia cinnamon, because the latter contains higher amounts of coumarin, which can harm the liver and increase the risk of cancer. Ginger may act as a blood thinner, so don’t use it if a dog is going to have surgery or is pregnant. It may also lower blood pressure and blood sugar, so if a dog has heart issues or diabetes, talk to a vet. When in doubt, leave it out. 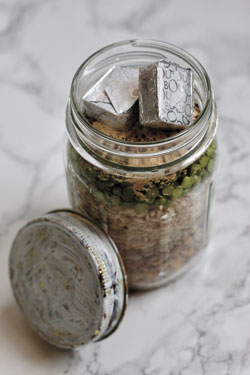 If presenting the soup mix as a gift, layer dry ingredients in a Mason jar and print recipe to attach to the jar.

Optional: Sauté onion in oil in a large stock pot over high heat for 3 minutes. Add can of diced tomatoes.

Add dry soup ingredients and 8 cups of water to the same large stock pot (unless starting with this step). Bring the mixture to a boil over high heat. Lower the heat and simmer for 40 minutes, covered with a lid. Taste and adjust seasonings if necessary. Serve with crusty bread and parmesan cheese, if desired.
Store any leftovers in the fridge for up to 4 days or freeze for up to 4 months. 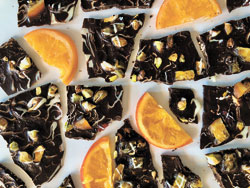 In a small bowl, mix together cocoa powder and melted coconut oil. Stir in toasted quinoa, maple syrup and stevia.

Pour mixture onto a plate or sheet pan lined with parchment paper or wax paper. Sprinkle pistachios, dried cranberries, candied oranges and salt over the melted chocolate mixture. Drizzle white chocolate over the top and use a toothpick to create swirl effect if desired.

Freeze for 1 hour. Break into pieces and enjoy. Store leftovers in freezer for up to 3 months. 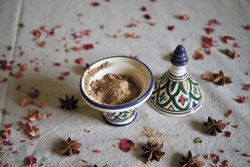 This is lovely sprinkled onto roasting vegetables or added to falafel mixes, soups, stews and tagines.

Dry roast the cumin, coriander, peppercorns, fennel and star anise in a cast-iron skillet until lightly toasted. This takes a minute or two and smells gorgeous. Cool and mix with the other ingredients, grinding in a pestle and mortar or spice blender until the mixture resembles a fine powder. Store in a glass-lidded container.

This spicy mix is good for up to six months. 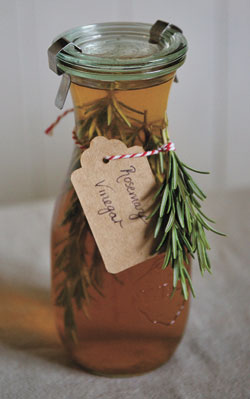 This fragrant, versatile vinegar makes a delightful holiday gift that can be enjoyed for months. Rosemary vinegar is delicious in salad dressings, sprinkled on vegetables (it is especially good on Brussels sprouts, cabbage and other brassicas) or added to sauces and homemade mayonnaise. It is also an excellent natural cleaner.

Wash the bottles and lids until they sparkle and then dry them thoroughly. Shake the rosemary sprigs to dislodge any dirt or insects if taken from the garden, then rinse and air dry.

Cut the rosemary so that it is two inches shorter than the bottle. This is so that all of the herb will be submerged in the vinegar. Place two sprigs of rosemary into each bottle. Cover with vinegar until the bottle is almost full and replace the lid.

Label creatively; a small sprig of dried rosemary tied to the outside of the bottle is a nice touch.

The vinegar will store for a long time in the refrigerator. When using in the kitchen, the level of vinegar will fall below the sprigs. When this happens, remove the rosemary—the vinegar will still taste of the herb. Use up any vinegar past its best as a bathroom cleaner.

Read 271 times
Tagged under
back to top